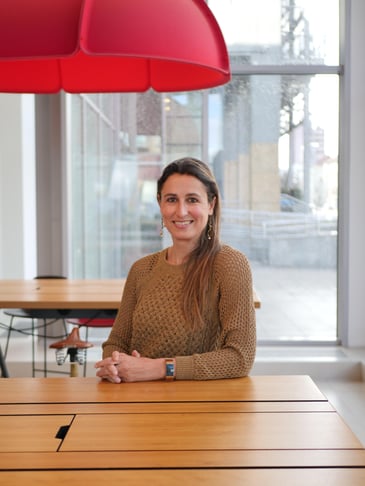 What are you passionate about?

I love sports in general but especially when it’s in a natural environment where I can actually breath some clean and fresh air. Any opportunity I get, I run to the mountains to refuel my energy! Travelling is another passion of mine, I am quite adventurous, and my favourite trips are always the ones to unknown destinations, where every day is a surprise and I feel that I am exploring something new.

As career levels rise, female representation declines. Why is this the case?

It’s a fact that as career level rises, responsibilities and time dedicated to work also increases. We still live in a society where the majority of family responsibilities are assumed by women. Therefore, this leaves less time and availability for women to pursue a demanding job that takes up the majority of their schedule. Fortunately, in the last few years, mentalities have changed and we are now seeing higher participation from male parents assuming different responsibilities. This leaves more time for women to dedicate themselves to developing their careers. In fact, we are already seeing a rise in the percentage of women taking senior management positions and this is a figure that will no doubt increase in the coming years.

What examples of positive change, in general, (with regards to gender equality) have you noticed since you began your career?

I believe that things have changed dramatically in recent years. Increasingly, we are seeing more countries, governments and society in general, defending and implementing equal rights for both genders. An example of this is the fact that very recently in Spain, the government has applied the exact same rights to mothers and fathers. Whereas 15 years ago, a new mother would have had 16 weeks of maternity leave while a new father would only have had 5 days. Nowadays, both parents have the same allowance of 16 weeks. This is a great step towards gender equality in my opinion. In fact in northern Europe, they have started much earlier with these types of measures and so in countries like Sweden and Norway you can find a sizable percentage of men dedicated to family matters.

Is there a female that you particularly admire?

There are several women that I admire for one reason or another, but there is one female that has impacted me very recently for several reasons. She is a Spanish Paralympic triathlete, and her name is Susana Rodríguez. She is an albino and was born with less than 10% vision, and due to her condition, she was bullied as child. She was told many times in her life that she wouldn´t amount to anything and today she has become a doctor and a Paralympic triathlete. For me, this a wonderful example of someone that has fought for what she wanted, despite all the obstacles she had to face in her life.

What have you seen or noticed that tells you we still have room for improvement with regards to gender equality?

There is always room for improvement but fortunately things have changed for the better. I still remember my first ever job interview, it was for a bank. This was around the time when I was finishing University, so about 22 years ago. One of the questions that the male interviewer asked me was ´if I was planning on getting married and having children soon?´ My case is not unique, there have been plenty of examples like this in the past. I just hope that these kinds of inappropriate questions are no longer asked in 2022.

What is the best piece of career advice you have ever received?

Not just career specific but life in general – and this is something that my father says to me all the time which is: do what you think is right, without worrying too much about other people’s opinion, because no matter what your choice is you will always be criticized and so at least you choose what will make you happy.

In your opinion, what are we missing out on most by not maximizing the talents of both genders?

Well, we only gain from having different points of view in any situation. If we all saw things the same way and agreed on everything this would be very boring! I think women can certainly bring their experience and maturity to any decision-making situation. In any case, having both genders involved will always result in a much more rounded outcome.

What is the one thing I can do to make a positive impact on gender equality in my organisation?

I think CPM is a very good example of a company that doesn’t make any differentiation between gender types. Women are respected and treated the same way as men – and included in the context of encouraging more women for senior positions - in our case, we have a higher percentage of women in senior roles than men. I’ve been here for more than 18 years and I can say that CPM is the most open minded company I’ve worked for. We are a big defender of equality and we respect people regardless of their gender, religion or skin colour.

IWD is about celebrating women´s achievements. Is there an achievement (personally or professionally) that you are proud of?

What I am most proud of, in my case, is the level of independence I’ve reached in my life with all the obstacles that I have had to face. I am a mother of two and it’s not easy raising two kids on my own while wanting to be on top of my career as well. However, this is the reality for many women across the globe. We are so used to fighting for things and all of the obstacles life throws at us ultimately makes us stronger.

END_OF_DOCUMENT_TOKEN_TO_BE_REPLACED

Receive updates direct to your inbox

Consumers now expect seamless integration of reality and the digital world. And that’s what we’re delivering. A video solution where anyone online can get immersive face-to-face advice, training or customer care - wherever and whenever they want it. Our solution comprises ACTiON, our new v-commerce platform, media-trained experts, AV kit and even branded studio spaces. It’s the ultimate one-stop-shop.